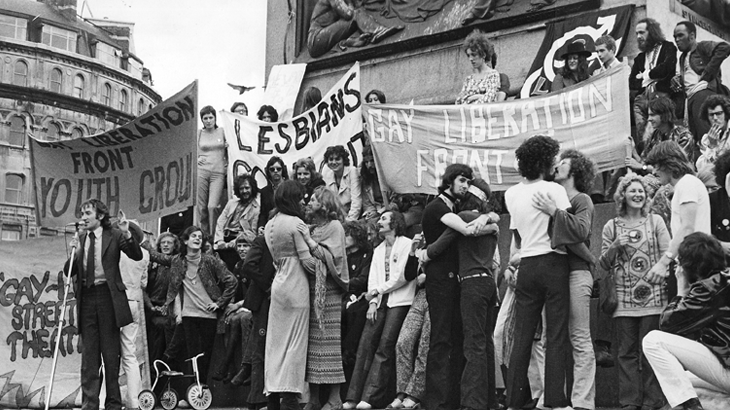 As Pride Month begins, both history and the future hang over it.

Narratives are critical. Queer activism and discourse often, like most other groups and identities, emphasises the common highlights of the past: the Stonewall Riots is a great example of this. And with this year being the 50th anniversary of the first Pride march (which came to be because of the Stonewall Riots), it's of note to discuss the influence of history today, and how it interacts with the present threats that clouds the future.

'X threw the first brick' is not really a statement of fact. It's a statement of political opinion. A common version is that Marsha P Johnson, a black, trans sex worker, did. Often it's said by those who want to stress the inclusion of trans people in queer activism. That's more than understandable. However, the truth is no one knows who threw the first brick against a police force that routinely assaulted those who frequented Stonewall Inn; exploitive Mafia owned bar, and other Queer bars. Sylvia Riveria doesn't know and she was there. The issue though is not necessarily the inaccuracy of that event, but in how it affects how we assess and look at queer activism since Stonewall. It paints a picture of cosy, everyone in unison, solidarity against an oppressive state when often that wasn't the case - the 70s and 80s saw a growing separation between Gay and Lesbian activists because of the (at times) misogynistic nature of gay male culture, and groups like the Gay Liberation Front were led exclusively white gay men. This meant too the exclusion of people of colour from these spaces, which led to a Venn Diagram of marginalisation in not just wider society but in various ethnic minority communities and in the said queer scene. Bisexual inclusion was opposed until the 90s in the anglosphere. And trans activism was at times separate from this wider movement. The fact there were trans figures in the GLF, like author Roz Kaverny, doesn't negate these imperfections. The historical narratives we accept then, the ones we take 'pride' in or use to promote contemporary causes, are not always accurate.

Why is this a problem?

The problem emerges from how certain, popular narratives can be exclusive. Take the 'gender critical' version of women's history. There's a reason why certain groups which are opposed to trans inclusion use the suffragette flag. It claims a lineage that goes back to Mary Wollsencroft, who authored Vindication of the Rights of Women (and like most writers of the time used 'sex' to describe both biology, sexual orientation and gender expression), but often uses the language of Suffragette and post-Suffragette feminism. In many ways it's a celebration of how far ciswomen have come: the insistence on (very much so) hard won rights and achievements like Nancy Astor becoming an MP. And the narrative says a key threat to all this, both in progress and in safety of women, is the 'sudden' rise in trans people existing, particularly trans women, and that trans men are lost lesbian siblings. There are numerous issues with this, from how it treats women as a continuously homogeneous political block, to ignoring how figures and institutions like Astor and newspapers were and are incredibly homophobic. But the narrative is popular (though not as much as has been claimed).

One way would be to point out the contributions to women's history by trans figures, like Irene Clyde (who helped edit a journal on women's liberation in the 20s and was a Suffragette). Another is to point out the simplification of historical narratives, to the point of whitewashing (both Labour and the Conservatives have a habit of this!). Perhaps the best way is to stress a queer and trans history that isn't just a mythology to recite. Quite, this month books like Before We Were Trans are going to be released. Rather, a history that is warts and all, that while popular in audience is also critical, and that is not exclusive to one group. In that sense, what we need is this:

Often limitations, on the never guaranteed fight for queer rights and liberation, is the development of a survivalist mentality. That we shouldn't help other groups because they're not us. That thinking is wrong on many levels, just by a simple check of demographics. It's wrong too because it's how we get rainbow capitalism where Pride is a fossil funded party and a quarter of homeless youth are LGBTIQA+. It's how we get institutional attacks on trans and non-binary people. And it's how the continuation of police and institutional violence against people of colour and women continue. Intersectionality sometimes comes off as too jargonistic at times. But what is meant is simple: oppose the divisions we're told exist and work together.

We must ensure then, in the face of rainbow capitalism and exclusionary narratives, that Pride is meant to be inclusive. It hasn't always lived up to this. But we must use that history we possess and the histories we uncover in two ways: to understand why we are here and what happened, and to help create something new, inclusive and amazing.

Our past is full of tragedy, and farce. But by learning about that, and combining it with grace, we can win the future.