I was sixteen when I first found, between my recommended videos on Youtube, a video of a girl talking about her experience in the LGBT+ community, her journey to 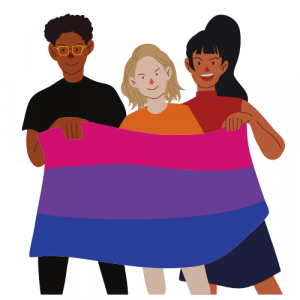 discovering her sexuality, and coming out as a lesbian. It was all very new to me. Of course, I knew that there were gay people and straight people, but I had no idea that there were so many sexual orientations, and that sexuality could be so fluid.

I remember my first thought after watching that video being “I love the idea of girls being with girls, it’s so pure” and right after thinking that, panic grew inside me at the thought that I might not be straight. I knew I liked boys because I had had so many crushes and even a couple of relationships with boys at that point in my life, but I was yet to have my first kiss and no boy at that point had made me comfortable enough to experience something like that.

Weirdly enough, I just knew I liked girls too. I never doubted that, not since the first time I thought it might be possible. I didn’t have any experience with girls yet, just a few crushes I had pretty much ignored, but I knew inside that I was waiting to fall in love with a girl and have my first non-straight relationship. I wasn’t just curious, I would spend days dreaming of finally meeting my princess.

The first experience I had with a girl came not long after. I was on holiday with a relative of mine and in that period, I was telling strangers that I was bisexual because it was a new term for me, and I wanted to find out how I felt labelling myself that way before having a proper coming out with my immediate family.

Of all the girls I met that summer, one of them, “A”, was acting weirdly around me 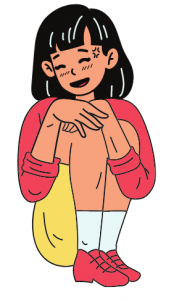 and I remember how I blushed when I found out she had asked another girl for my number. I later discovered she liked girls too and she had a massive crush on me.At first, I wasn’t interested in her and gave my first kiss to her sister, who also seemed very interested in me and with whom I spent most of my time. After a while, I realised her sister was too like me and my ideal type was actually an extremely sweet and shy girl, like “A”.

I remember we never kissed during our relationship, because she was too shy, and I wanted her first kiss to be special. I thought we had all the time in the world, but I was wrong. After her, I had a few other relationships with girls and convinced myself I was gay. I didn’t like the idea of being bisexual, because I only wanted to like one gender. The idea of being a lesbian felt more comfortable than the thought of being bisexual.

Everything changed when I started dating boys again. I really liked them, just as much as I had liked my ex-girlfriends, but at the same time in a different way. Somehow I convinced myself I only liked boys and that the girls I had been with before were just “a phase”. I wouldn’t say this was really internalized homophobia, I was just obsessed with all or nothing, black and white, and I hated the uncertainty of being in the middle. I confess, extreme binary thinking is still something I struggle with, but at that point I was just self-sabotaging and gaslighting myself into thinking I had to be either gay or straight - and that there were no other options.

Despite this, I kept having relationships with boys and girls, convinced I was just experimenting to find my real sexual orientation. After a while, I had a mental breakdown and refused to accept or love myself for what I truly was. I still don’t know if that situation came from the way I’ve been raised or from what I did to myself, but I didn’t know what to do or where to turn. It seemed like all my friends were coming out as gay, and for a while I was the only bisexual in my group. They often joked with me and acted disgusted whenever I mentioned my attraction to men. I felt invalidated and tried to understand what was wrong with me and why I couldn’t just stop being fickle once and for all.

It wasn’t that easy. It could never be easy, changing what we really are, but it’s also just as difficult trying to accept ourselves. Luckily, I met the right people. They shared their stories with me, showed me how proud they were to be part of the LGBT+ community, even if they weren’t gay, and accepted me and loved me for who I was. I learned from them that I had absolutely nothing to be ashamed of, that we’re all unique and valid the way we are and we should love ourselves if we want to be loved by someone else.

That changed everything for me. I came out properly to my friends and family, not caring about those who didn’t accept me; I started posting openly on social media about my sexual orientation and made my account a safe space for the closeted members of the community. I started telling people about my experience and helping them to accept themselves completely. I now am a proud bisexual activist.

I couldn’t have done it alone, so now I’m trying to be there for as many people as possible and help them and teach them to help others as well. I know sometimes it seems like we’re alone or that there is something wrong with us and we need to change and ‘fix’ ourselves, but that’s not true. There are so many people out there who struggle the same way we do and helping each other is the best way to start a self-love revolution.

A message I’d like to give all my lovely bisexuals out there, who think they are just confused or “going through a phase” just because society teaches us there’s no shades of grey, doesn’t make it true.  I want you to know there are many more shades than you have been taught to see and that each one of them is valid and precious.

Love yourself for who you are and don’t ever try to change, because you’re unique and the world needs the real you. If you don’t love yourself yet or think you’re undeserving of love, just know that I love you and I’m glad you exist.