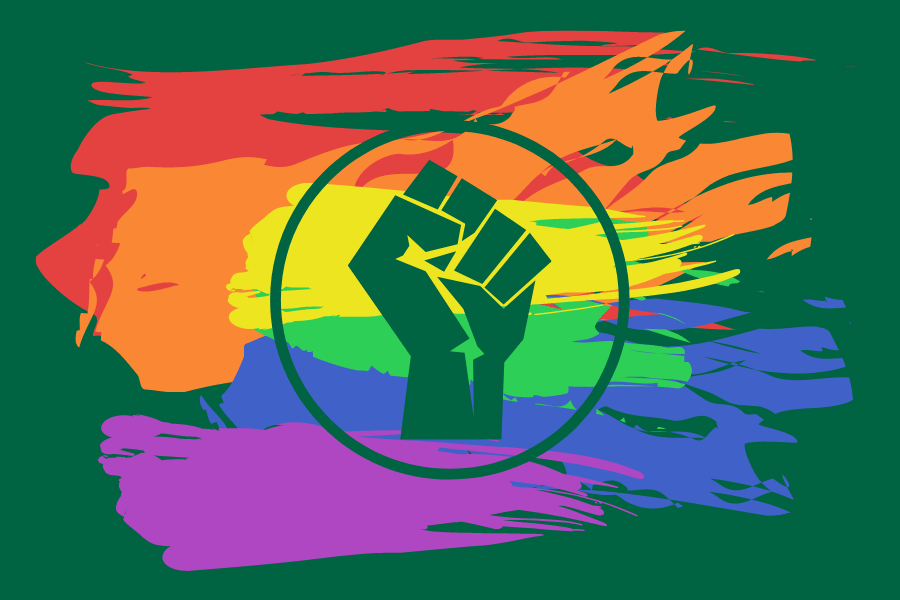 It’s difficult to properly dissect modern UK LGBT+ history without at least acknowledging the impact of the Stonewall Riots, from across the pond. The fallout from ‘Stonewall’ resulted in the creation of the Gay Liberation Front in the US. Which in turn inspired the UK group of the same name to form on 13 October, 1970.

The creation of the GLF (UK) was a breakthrough moment in modern UK LGBT+ history. It galvanised a community to demand liberation through direct action and promoted solidarity with other marginalised groups. But at a time when LGBT+ people were being legally sacked from their jobs for simply kissing in public, broader alliances were needed. One such alliance was between the LGBT+ community and the trade union movement.

When thinking of early support between the LGBT+ community and unions you may jump to 1984, when Lesbians and Gays Support the Miners (LGSM) stood shoulder to shoulder with mineworkers across Britain during a year long strike. It’s an event that’s been well documented, even making it to the big screen. However, there were many less high-profile instances of support and solidarity brewing prior to this point.

In the early 70’s, members of the National and Local Government Officers’ Association (NALGO) took strike action after a gay member had been victimised by their employer. 1977 saw the first ever gay and lesbian Trade Union Congress. Before we even made it to the 80’s, major unions such as NUT (now part of NEU) and NALGO had voted to support their LGBT+ members. Many unions were vocal LGBT+ allies at a time when much of society was still hostile.

Following the LGSM support for the National Union of Miners from 1984, chapters of NUM became the first non-LGBT+ organisations to participate at various Prides. Miners’ groups were also some of the most outspoken allies of the LGBT+ community in the fight against the cruel Section 28 amendment to the Local Government Act (1988), introduced by Thatcher’s Tory Government.

Throughout the 90s, trade unions continued working to advance the rights of the LGBT+ community. Adding their voice to external campaigns like the call for same sex marriage, along with Stonewall. And the fight for progress was also tackled internally, with many unions embracing roles and committees specifically for LGBT+ members to progress queer equality from within.

Whether it was lobbying for same sex marriage, greater legal protections at work, LGBT+ pension rights, or support for trans people in the workplace, unions have been a part of that fight. They’ve been vocal proponents in the pursuit of equality and LGBT+ rights for decades and many from the LGBT+ community are trade unionists. The fight for equality is a broad one, where LGBT+ rights and workers rights are often won together.

And so, we’ve just entered 2021. There is a fragile global atmosphere, both literally and figuratively. The far-right and bigots everywhere have been emboldened. Attempts to drag back progress on equality by decades are happening all over the planet. A hostile media and cruel, crooked governments mean the fight for equality is as important as ever.

In the UK, attacks on the transgender community and their rights occur almost daily. Promises that have been made by successive Tory Governments to advance LGBT+ rights are yet to be kept. Workers are mistreated and expected to work in potentially dangerous conditions with little or no state protections. Johnson’s Tory Government and the hostile right-wing press are vilifying unions and their members, just for demanding the most basic of provisions to keep them safe during a global pandemic.

"When the attacks on equality are many, it can be easy to isolate in your own fight, forgetting that strength can come from how broad an alliance is."

To combat this, the LGBT+ community and trade unions must remember past victories we have won together. Workers are gay, lesbian, bi, trans, intersex, ACE/ARO, they are queer. The interconnected relationship is an obvious one but can be fragile. When the attacks on equality are many, it can be easy to isolate in your own fight, forgetting that strength can come from how broad an alliance is.

So how do we keep this allyship strong?

As a start, more frequent and visible shows of solidarity. When the trans community are under attack, unions must stand with them and speak out. When teachers are forced to work in dangerous conditions and the media vilifies them, LGBT+ organisations should come out in support. When there are calls to legally ban conversion therapy, unions need to be part of those calls. When care workers are striking for pay parity, the LGBT+ community should back them.

Organise together. Unions and LGBT+ groups have historically achieved great things together; educating and progressing. Whether that's through events, educational talks, fundraisers or protest; let's organise. These points may seem obvious but they're the bedrock to successful and progressive societal change.

Both parties have an inherent stake in fighting for the marginalised and underrepresented; fighting for each other. We must double down on efforts and keep working together to lobby government, pushing for better rights and calling out harmful public commentary, as we have done many times before. This allyship is decades in the making, let us not forget it.