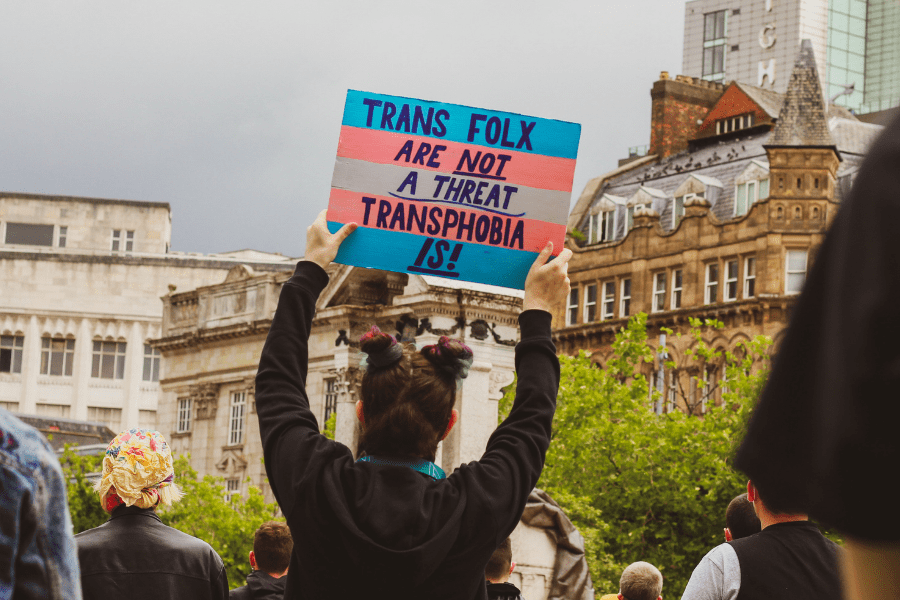 Feminism has a long history, with the advent of Western Feminism being somewhere in the mid-1300s however it wasn’t until the 1960s that feminism as a topic was being analysed critically by feminists themselves. From this analysis came what we know as Radical Feminism which is just one of many perspectives under the broad umbrella of feminism.

The fundamental belief of Radical Feminism is that society should be reordered in such a way that male supremacy is eliminated in all social and economic contexts, while also recognising that the experiences of women are affected by other social divisions such as Race, Class and Sexual Orientations.

However, since its bold inception Radical Feminism has suffered from divisions on the subject of Gender Identity. It was only in the 1970s that the first trans-exclusionary feminists really began to make themselves known. Original TERFs operated in a manner that would be considered more “conventionally” bigoted today, threatening violence against trans women who dared to exist in radical feminists or lesbian spaces. Although, some of the modern recognisable TERF talking points existed, i.e. biological essentialism.

In 1979, what has become known as the hand book for TERFs was written. “Transsexual Empire: the making of the she-male” combines TERF theory with political action, arguing that “transsexualism…should be morally mandated out of existence” In essence, the book posited that while it would be impossible to ban transitioning or ‘stealth’ trans people, TERFs should be making transitioning as difficult as possible. Sound familiar? After this landmark text, conflicts between trans-exclusionary and trans inclusionary feminists stayed generally on a low simmer for the next 30 years.

In 2008 the word TERF was first coined by trans inclusionary feminist blogger Viv Smythe. Thereon, the term - along with the associated ideology - spread and became especially prolific on progressive blog sites like Tumblr, which is where I first heard the term. It further grew supported by Right-wing media outlets like those owned by the Murdoch empire, to the point where it has become (unfortunately) well-baked into the British definition of feminism.

Many gender theorists attribute this growth in the UK to a toxic combination of historic imperialism and the wider “sceptic” movement from the 2000s, that had an obsession with debating pseudo-science instead of debunking and ignoring it. This growing support from the right-wing media has unsurprisingly caused TERF ideology to become more serving of right-wing aims; not only attacking trans people but the wider LGBTIQA+ community as well, all the while undermining the progress feminists have fought long and hard for. Although they're very quick to deny this and mask their attacks in (faux) concern, the façade of LGBTIQA+ support and feminism falls very quickly when these people are confronted.

So, what was the point of this brief trip though history?

"What's significant here is that the majority is also part of an oppressed group."

Firstly, transphobia did not come out of nowhere and by no means is it modern or progressive. Much like many other forms of bigotry it is the result of a majority holding power over a minority and attacking any attempt by the minority to seek a redistribution of power. What's significant here is that the majority is also part of an oppressed group.

JK Rowling wrote in that essay "now is a dangerous time for women" and I completely agree. But the threat to women isn’t trans people, the threat to women is what it has always been: the patriarchy. Women and trans people are allies in this; both are threatened by rigid gender roles which suppress their expression. Transphobia is yet another tool the patriarchy uses to subjugate and divide like-minded people. If women and trans people are pitted against each other, chances to disrupt the real power structures from which they both suffer are missed.

Secondly, debate is not the way to eliminate transphobia. Debating a belief implies that it is valid, and transphobia is simply not valid, in any form. Debate provides a platform for transphobia to be repeated and spread. Evidence has shown that repetition of lies and fake beliefs only affirms that belief, no matter how strong the oppositions in the debate. QAnon is a very relevant example of this.

False debate fed the mess we're in; we must choose instead to debunk and educate. As it's only through education that we can foster acceptance and respect. If people have reached the point of not listening and they will not change their minds, then we must send the message that their beliefs are no longer conducive to a civilised society.

Finally, we as allies are failing trans people, especially in the way we engage with transphobic rhetoric. Recently the phrase “trans women are women” was trending on twitter and whilst this has been a great rallying cry, it creates a space for transphobic individuals to respond in bad faith. For example, questioning “What is a woman?” and zeroing in on ‘holes’ in people’s understanding of the complex issue of gender.

"An issue with many trans allies and transphobes is that they get so lost in theory, they forget the real people involved in the issues."

I propose we answer that question in the only way it can be answered, by dismantling it. As befits the reality (and variety) of human experience, there's no one way to define what it means to be a woman. Womanhood and femininity are entirely subjective, every person will have a different answer, if they have any answer at all. An issue with many trans allies and transphobes is that they get so lost in theory, they forget the real people involved in the issues.

We need to listen to trans people, and act in their best interest. We must not use euphemisms or dog whistles when describing actions and understand that labels and context matter. I'm particularly not fond of the term TERF, as it lends the legitimacy of radical feminism, when in reality the movement has devolved so far from the radical feminist movement which they originate from.

We need to adopt better phrasing and slogans, that don’t invite transphobic responses. For example “trans liberation now” is useful. If someone was to ask “liberation from what?”, we can have a real conversation about the 'what' rather than devolving into the minutiae of gender metaphysics, which just ends with frustration on both sides.

We must acknowledge that transphobia is systemic. Transphobia has never been just a few bad apples; it's an entire system that perpetuates the oppression of trans people. By denying this we are complicit. There can be a general apathy towards trans liberation, with allies fighting or responding only when certain problematic individuals are being very vocal in their bigotry. Compare the reaction to JK Rowling’s transphobia to the issue of the high court ruling, that would make transitioning even more difficult. We must be proactive in the fight for trans liberation. To adopt a slogan from the Black Lives Matter movement, it is not enough for us to not be transphobic, we must be loudly anti-transphobic.