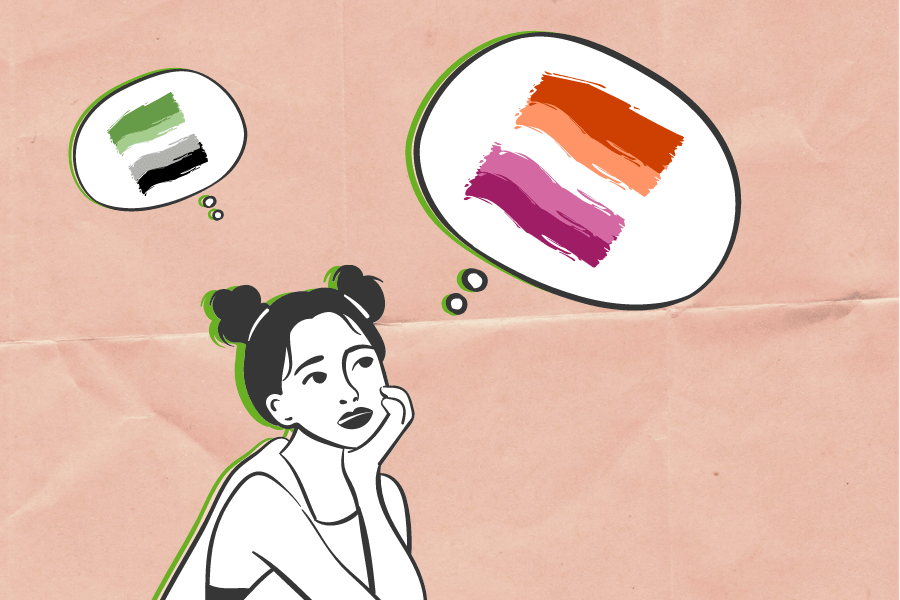 When I was 12 I thought I was Bi. I realised I was attracted to women reading a book on renaissance art of all things. At the time I didn't question my attraction to men, or lack thereof, that was good old compulsory heterosexuality at play but also I think - a sense that in one respect I felt the same way towards men as I did to women. The urge to get to know someone, be close to them, for them to see me and like me - which I now would call a 'squish' - I had those for both men and for women and I still do.

Looking back through my childhood I'm able to identify quite a few instances of attraction towards women. Like this popular girl in year 8 who used to wear very skimpy outfits that always made my stomach feel weird.

Still I thought I was asexual for a bit as a teenager. It was after two failed relationships I had with girls. Both failed for about the same reason.

The first one I made a real effort. We spent time together, we held hands, we never kissed and I told myself it was because we were nervous - of doing it and of the potential reaction - and doubtless that was a factor but really I just felt like I couldn't...just wasn't able to.

We'd been friends for a little while when she confessed her feelings to me over text and asked me to be her girlfriend. I accepted eagerly, excited at the prospect, but when I saw her next it was really strange. I didn't know how to act, it was like we'd declared ourselves 'in a relationship' and...now what?

Still we were happy for a time. It was nice spending time with her, I liked being close to her, physically and emotionally. We used to send each other poetry and sit in each others' laps at break times. Normal couple-y stuff.

"...I was doing this stuff because that's what people do in relationships, right?"

I remember being happy, but I also remember an odd sort of detachment. Like I was doing this stuff because that's what people do in relationships, right? Ticking all the boxes, filling a role.

I think maybe what I was really enjoying wasn't the actual experience of being a relationship, but the excitement of doing something new and a bit grown up...the thrill of people seeing me doing this, considering me in a new light. The satisfaction of being visibly queer. Maybe I was really infatuated with the idea of being in a relationship. And after a while the novelty wore off.

I began to feel frustrated, desperate almost, like I was trapped. I avoided her. It was only just over 6 weeks when I ended it.

The reason I gave when asked was the negative attention we got from others. We were never bullied, but plenty of people - mostly boys - took it upon themselves to make gross comments. While this wasn't exactly pleasant, for instance I remember being followed all the way home by a group of lads shouting and whooping and gesturing and groping themselves - it wasn't a totally honest explanation.

It was just I couldn't articulate the real reason why.

I was actually really antsy to get into a relationship again after my break-up. I can clearly recall googling how long it was respectful to wait before dating someone new.

So my second relationship, I actually can't remember who asked who. Maybe I did, we were...kind of friends?

I was frustrated to find it was still hard to be with her. Maybe harder even, since we weren't as close friends as I had been with my ex. It felt like a chore to spend time with her, honestly, so I did it as little as possible. It honestly wasn't a conscious thing, but every so often I would realise we were just...shoehorning each other into our respective lives and otherwise we had little interaction. Sometimes we'd be good together, giggly and affectionate but mostly I felt really distant, and like the whole thing wasn't even real.

She must have felt it too, because she ended it an admirable five months in.

"This was the end of whatever affection we had for each other, and was a blow to my self esteem that I'm honestly still recovering from."

It was anything but a clean break, which just served to complicate things further for me. We fucked around for ages, "getting back together" three times in total, whatever that actually meant. We got pretty close as friends, hanging out more than we ever had while we were supposedly dating and having several drunken heart to hearts most of which were dismissed in the cold light of day but one which led to a horrible, horrible fight that lasted ages and blew up in the worst possible way. This was the end of whatever affection we had for each other, and was a blow to my self esteem that I'm honestly still recovering from.

Probably the strangest, most discomfiting thing about that time was how much I was thinking about sex. I did not love that girl. I didn't feel anything like the affection that I'd had with my first girlfriend, but I could and did imagine having sex with her. We kissed and that bit came so easily. I fantasised one time, on a rare date to the cinema, that I'd get to second base if we got a seat near the back. It never happened but I fucking wanted it.

It was so weird. How could I have all these sexual feelings but find the 'being in a relationship' bit so hard?

Now maybe it is was just my age, I have considered that. That I just wasn't ready, I know some kids aren't at fifteen. But then...a lot of kids are. Not to have sex necessarily, but to be romantically involved. I have always hated when adults dismiss teenage relationships since so many of them can and do fall deeply in love.

In any case, I don't think it was a question of being too young.

I can remember being a little kid, eight-nine-ten and 'playing at' being in a relationship. If was a weird little status thing, you were expected to select a suitable member of the opposite sex and claim them as your boyfriend. Nothing much would change between you after this, the idea of any kissing was still scandalous! In fact if there was any genuine depth of feeling the two lovebirds generally tend to hide from one another.

I saw a bit of that game in the way I came into my two teenage relationships. It was quite an unnatural process, we 'claimed' one another in the same way, just decided we were girlfriends and everything else was meant to come next. I blamed this for all my troubles, how could I be expected to succeed under such circumstances?

But the truth is they just both felt all wrong. Stifling, like I was playing a role I wasn't very good at.

I remember my brother bringing his first girlfriend home, he was younger than I'd been. They were describing their dates, how they met up before registration, every other lunchtime and that they'd always walk home together as far as the town centre where they parted ways.

I just felt...repulsion, I've no other word for it, at the idea of that. The idea of living like that, of not having my own life to come back to but being answerable to someone always, living under the expectation that your free time is shared time with few exceptions. That repulsed me.

After my second relationship ended, coincidentally I discovered the concept of asexuality, and I delved deep into the research of it, limited as it was. It wasn't so much that it made perfect sense, more like it presented a decent excuse and I was very committed to making it fit me.

"In hindsight the word 'aromantic' kept popping up a lot in my results but I ignored it."

Those episodes of sexual attraction I'd had in the past? I mislabeled them as sensual or aesthetic attractions. I subscribed to split attraction model for a while - as a biromantic asexual. I spent a lot of time in forums doing mental gymnastics, and took a whole lot of surveys. In hindsight the word 'aromantic' kept popping up a lot in my results but I ignored it.

I came to the conclusion that the proper, more adult way of going about a relationship and one that would allow me to thrive was to go on dates and slowly get to the point where you had attained the level of 'boyfriend and girlfriend'.

I was eager to test my theory. I got myself on OKcupid pretty well the day I turned eighteen and quickly found myself in a relationship with a man. It seemed to be going well for a little while, I visited him like clockwork every weekend, sometimes he'd come to stay with me. We even had sex. I was over the moon.

But then the same sort of problems started to creep in. The warm glow of his attention faded. Again, I refused to admit it, but I was more into the idea of being in a relationship, then I was actually into him. I did enjoy some of the time we spent together, but increasingly as time went on I was irritated by him, resentful of him, and pleased when our time together ended and I could stop pretending and return to my real life.

Soon I had to admit to a friend that I was probably gay. Saying so felt like a great relief, and again was a convenient excuse as to why my last relationship didn't work for me.

The realization of aromantic came a bit later. After a long spiel of online dating, the only positive outcome of which was a date who became a lasting friend. I found myself unable to hide from it. I couldn't tell you when I finally got there. It was a piecemeal thing, and I feel as though I'm only just getting to the point where I'm maybe, probably not questioning myself.

But I still have a complicated identity.

I thought that hook-up culture would work for me, but it's never been very successful. I have anxiety. I'm a huge introvert and it takes me a long time to open up to and feel comfortable with people. So how could going through the motions with a perfect stranger feel anything like a dishonest performance. I can't have a genuine connection with someone I don't trust.

It was just a matter of me thinking I had to do something, otherwise I was a total failure. A total weirdo loner. How could I even call myself gay if I wasn't doing gay stuff.

It's upsetting. And it's lonely.

I'm still not exactly secure in myself. I kind of know what I am, and I kind of have some vague idea of what I want and don't want. If only it were a bit easier to find people I could learn with. My dating pool being quite small for a few reasons.

What's valuable is recently I'm facing up to my own toxic traits, trying to work on negative aspects of my personality and approach others without agenda. That will help.

This quarantine has given me some time for serious self reflection if nothing else.